Intervention Against Tasteless Wall Decorations in Hotels and Holiday Apartments.(Part 5) 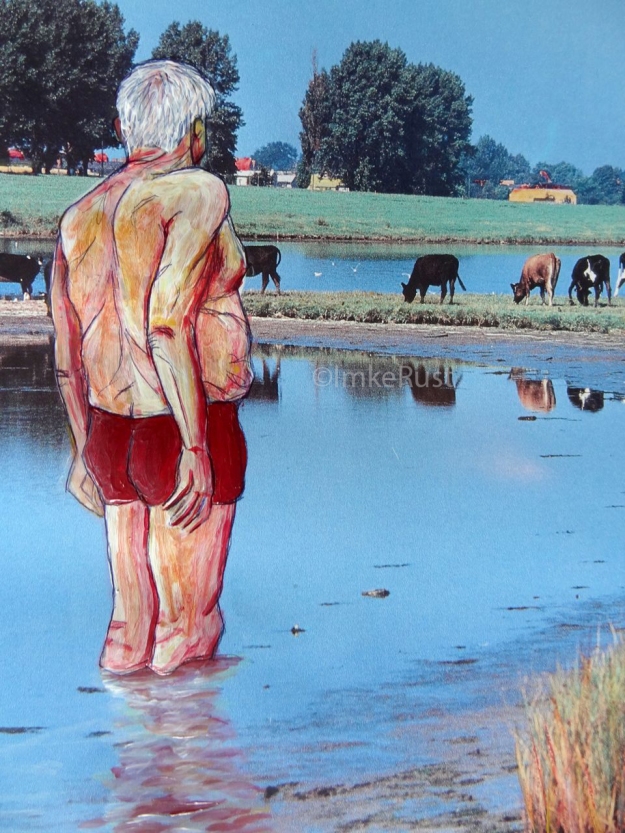 Cutting out a landscape photo from a calendar and framing it in a cheap frame seems to be a general habit all over the world. Do people really think that is cool? Ok, it is cheap and at least usually calendar photos usually show an average pretty landscape. But still, as my art lecturer would say: “Why, Larry? Why?”

Our bungalow on the island Poel in the Baltic ocean was small, but had a few typical holiday bungalow decoration gems on offer. This faded landscape of the area was one of it and in urgent need of improvement.

Found calendar photo or the BEFORE pic

I decided to pimp the calendar image with some ‘real’ painting and a view which looks slightly more exciting and challenging. On the previous day I photographed an old man going for a swim in the shallow water and decided to add him to the idyllic island landscape.

While painting, I had all kinds of ideas for the title, envisioning the man to be a mythical, cow eating giant responsible for the mysterious disappearance of the cows. Or a ghost who only appears at certain times in the water and stares at the cows before submerging in the sea again. Or just the friendly village eldest who has been going for a swim every day without fail for the past 28 years….

But I guess I leave the stories for the viewers who will hopefully notice something strange in this picture and start wondering.

Making of The Great Bather ©ImkeRust 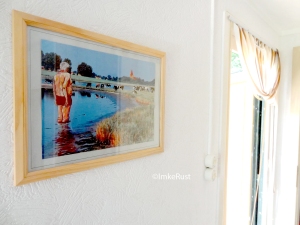 The Great Bather back on the wall©ImkeRust

Did you like this? You can view more similar actions on my webpage under Interventions. I will be posting future deco busting actions on my blog, so be sure to sign up to receive notifications of updates via email. 🙂