To read more about the project, please click here.

A Copy of the accompanying catalogue can be downloaded here.

According to an old San myth the Etosha salt pan was formed by a sea of tears shed by mothers for their murdered men and children. Strangers came to their land and killed all men and children. The women wept so hard, that their tears formed a big lake, which then dried out.

I have created seven human-like figures from rock-salt to represent these women. The work and material used is symbolic on many levels. Not only are salt and water the two elements which make up tears, but also the two basic necessities for all life to exist. Once it rains these mythological ‘women’ will start weeping again. Their ‘tears’ bring life in form of water, but too many ‘tears’ will also make the soil immediately surrounding it infertile due to it’s high salt content. The water will erode the salt pillars and eventually totally wash them away. To me the impermanence and the steady transformation of this work is fundamental, as it represents the laws and cycles of nature. Also reminiscent of the biblical wife of Lot, who got ‘stuck in history’, these ‘women’ can eventually transcend from their earthly matter and form into a higher realm. According to alchemists salt is the third heavenly substance, it is the form aspect and represents the action of thought on matter.

The use of salt by humans has a long and interesting history. Salt is symbolical for cleansing, preservation, healing, spiritual incorruptibility, wisdom, knowledge and is a sign of hospitality. On a daily and practical level salt is also used all over the world to preserve food or add flavor to it, for cleansing and to safeguard people from evil. All these concepts relate either symbolically or literally to the Etosha pan and the Etosha National Park.

In the following gallery, you can follow the transformation of the Weeping Women, with pictures from different times after completion. 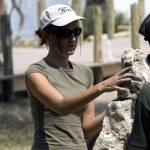