An environmental art project and exhibition by Imke Rust

I believe that art can do more, than just being decorative or thought-provoking. To me the role of the artist is to mirror the social and political environment of the society he/she lives in, to act as a visionary who can suggest alternative and new realities and as a healer who uses the power of the arts to contribute in making the world a better place.

Towards the end of 2011 the general concern about the environmental threats posed to the Namib desert by increased mining and industrial activities and proposed plans for off-shore mining of phosphate on the Namibian coast, started growing. Having grown up in Swakopmund and still considering it one of my homes, I, too, am concerned and decided to find ways in which I can do my part “to make the world a better place” and protecting the environment.

I realized that protesting or being against what I consider to be a threat is not the way to change things – or at least not my way. Instead I looked at ways of putting energy into creating the reality I would like to experience: a balanced, healthy and protected environment, in which all beings co-exist in a harmonious way, without destroying each other. My choice of creative expression has been inspired by the spiritual idea of ‘what you sow is what you reap’.

The works had to fulfill at least one of two different purposes:

Loosely based on the research I have done into different aspects of old shamanic and spiritual traditions from all over the world, I tried to find my own formal approach, symbols, rituals, imagery and use of form and materials, in line with my intentions to produce my art or healing works. By working directly in nature and creating land-art installations, interventions and performances, I hoped to establish a more direct connection between humans, nature, art and the spiritual world.

All installations have been carefully removed after they have been documented.

To see artworks from this project, please click on the following links: 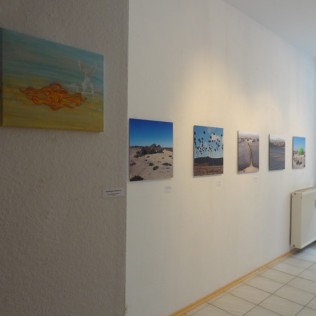 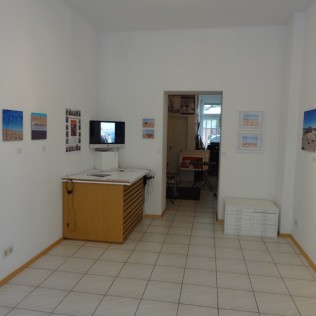 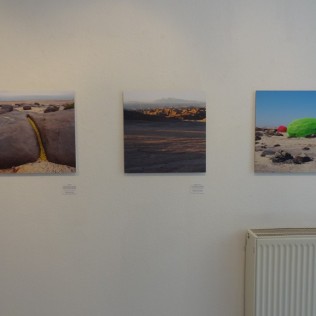 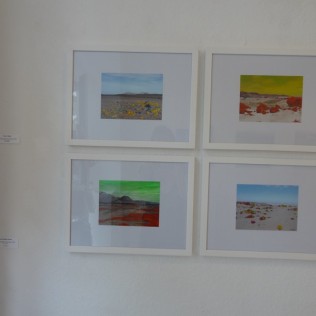 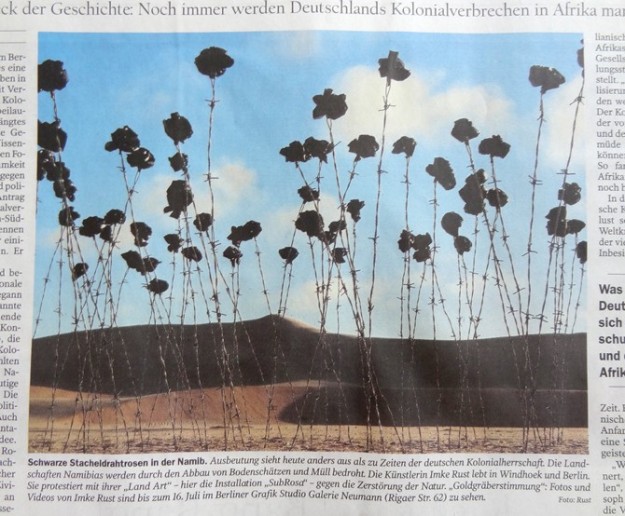 The caption says (My translation):

” Black barbed wire roses in the Namib. Today the exploitation  looks differently than in the times of the German colonial power. The landscapes of Namibia are threatened by the mining of natural resources and pollution. The artist Imke Rust lives in Windhoek and Berlin. She protests with her ‘land art’ – here the installation “SubRosa” – against the destruction of the nature. “Goldgräberstimmung”: Photos and videos by Imke Rust can be viewed up to the 16th of July in the Berlin Grafik Studio Galerie Neumann (Rigaer Str 62). “

You can read the online German version of the “Tagesspiegel” here.

View photos of the opening of the exhibition here.

If you are not familiar with the background of the debate and concerns and if you are interested to find out more, you can find a good overview on the website The Earth Organization Namibia.